skip to main | skip to sidebar

Jaley has been teaching her 5 year old brother, Kendall, how to play an instrument she received several years ago from her Great Grandpa.

Just to demonstrate Kendall is surrounded by crazy Harry Potter fans - aka - Jenna - he calls this musical instrument a hermioneca.

No way am I going to tell him he is saying harmonica wrong.

John gave me flowers for Valentine's Day ... so sweet ...

Jenna had some fun taking pictures. 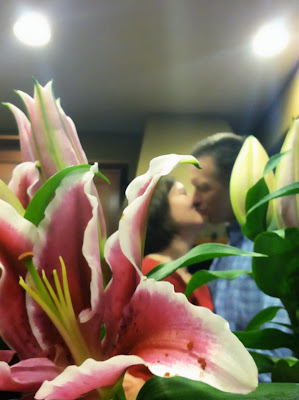 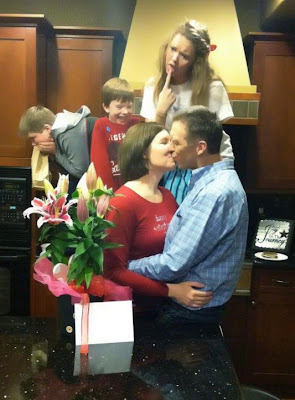 I love how Kerst is barfing in a brown bag ... and Jaley is gagging herself ... Kendall is giggling (and I am cracking up too)﻿
They are a silly bunch.
Posted by ckm at 5:03 PM 1 comment:

Kendall attends Kindergarten Lunch Buddies and a little bit of afternoon Kindergarten Enrichment.  I pick him up early after I finish helping at the school.  He is not happy when I pick him up - he wants to stay.  He loves Ms. Stephanie and his little friends.

A couple of days ago Kendall told me that for his birthday, he wants to stay the entire time at Kindergarten Enrichment.

From "Music in the Human Experience: An Introduction to Music Psychology" by Donald A. Hodges and David C. Sebald


"Researchers have demonstrated the significant role of the family in a child's developing sense of identity (Creech, 2009). Budding musicians were included in a five-year longitudinal study of over 200 talented teenagers (Csikszentmihaly, Rathunde, & Whalen, 1997). Musically successful adolescents usually had a strong family support system. Intensive interviews with 12 families showed how parents and children developed a family musical identity (Borthwick & Davidson, 2002). Parents served as role models and created expectations of musicianship. Often, parent and child bonded over shared musical interests. Siblings, too, had an influence. "Therefore, the child's musical identity is shaped primarily by the responses and values given by his/her immediate family." It is important to note, however, that having musical parents is not necessary for the child to develop musicality. Howe and Slobody (1991) found that only one-tenth of a group of exceptional music students had parents who were active musicians. Although the parents' musical skills were not critical, the level of their involvement was (Isbell, 2008; McClellan, 2007). Parents of successful music students were nearly always highly involved in mentoring the students' practice times, interacting with the music teacher, and so on."

Thank you for being that kind of parent.

Wow.  That touched me to my core.

I asked her to e-mail me the quote so I could have it ... forever.  She did ... and at the end was the sweetest note ever.  One I will treasure forever.  Joy.

Julia's note:
"This is you. In one paragraph of text. Love you mom. Thanks so much for always supporting me in everything that I do. I cannot wait to know that you're in the audience at my concerts once again this March. It's the way that it's supposed to be :) There is not a day that goes by that I don't thank Heavenly Father for blessing me with such wonderful parents that have taught me the way you and Dad have. I am THE luckiest girl in the world to have someone as loving as you to always be willing to sew costumes for a production, to take pictures of crew members, to go to EVERY musical production and record, and to make me feel special the way that you brag about me on the family website. ;) I miss you so much, Best Friend.
Love,
Your Jules"

A couple of weeks ago I had a lesson on gratitude in Relief Society.  The teacher gave everyone a gratitude journal.  I keep it on our dining room table and every day or two we all write what we are grateful for.

Yesterday, I was grateful for my kids because they make me laugh.

Here is one great example ...


Last night before we said prayers, Jenna stole some of Kendall's French Fries.  He was NOT happy.  Oh the glare she got from him.  He settled down and I continued saying the prayer.  After the prayer Jenna started cracking up and explained what happened.  During the prayer she peeked at Kendall and saw him glaring at her and then she saw this:
He's got his eyes on her ... No wonder why he doesn't close his eyes during the prayer.
Posted by ckm at 8:03 AM No comments:

This reminds me of the grapefruit syndrome ...

We are expected to get 14-24 inches tonight through tomorrow!  The kids are hoping for a snow day.  I just hope John gets back from his business trip safe and sound tonight!
Posted by ckm at 4:00 PM 2 comments:

ckm
I am blessed. 5 little miracles. One amazing husband. Many tender mercies have gotten me this far...